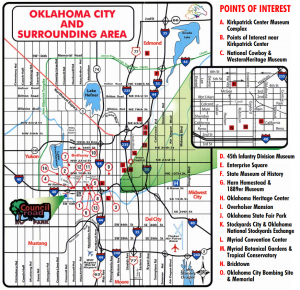 B. Points of Interest near Kirkpatrick Center

The area known as Bricktown was the hub of commerce for Oklahoma City almost two years before the Land Run of 1889, when the Santa Fe Railroad laid track. The Santa Fe was followed by the Rock Island, the Firsco and the Katy Railroad companies.

The buildings needed to house the freight were built of red brick – the most available building material in the area. A testament to its durability is that many of the buildings refurbished for use in this newly renovated district were built in the 1890’s.

Neal Horton, a developer with a vision in the 1970’s, saw the potential of Bricktown. Unfortunately, the oil and banking crash of 1982 kept him from realizing his dreams. Others who believed in the project picked up the dream and brought it to life in the past decade.

The district is alive with businesses, a festive canal, riverwalk, water taxis, an Oklahoma City Triple-A baseball team (the Oklahoma Red Hawks), the AT&T Baseball park and a schedule of events to keep everyone entertained. There’s plenty of parking, covered and otherwise, to accommodate visitors.

Discover the West at the National Cowboy and Western Heritage Museum

This trio of western experiences abounds at the National Cowboy and Western Heritage Museum, a 220,000 square foot facility that has assumed a new national presence as a living memorial to the indomitable spirit of the West. Located high atop Persimmon Hill in the rolling hills of northeast Oklahoma City, the museum and beautiful gardens provide an opportunity to step into the past and learn about the history and culture of the American West.

Did You Know This about Oklahoma?

Admitted to Union: November 16, 1907
State Bird: Scissor-tailed Flycatcher
State Flower: Mistletoe
State Tree: Redbud
Capital Cities: Guthrie (1907-1910), Oklahoma City (1910-Present)
State Nickname: “The Sooner State”
The Oklahoma/Kansas border is at the 37th Parallel
Route 66: More miles of this historic highway remain accessible in Oklahoma than in all other states combined. (Many of these miles are near Council Road RV Park).